Before and Beyond Number? 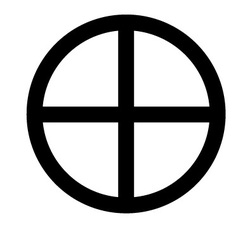 It has become relatively common knowledge that many ancients—perhaps Pythagoras is the most well-known—trusted numbers to guard the truths of the universe. Such a concept is inherent in musical traditions passed down over the years. This brief post results from my own skepticism in the primacy of number. I do not refute the intellectual power and organizational capacities of numbers, but, especially when one begins to research the origins of counting systems, numbers as we know them become somewhat suspect.

The main question I ask: why assign 360 degrees to the circle? I know the Sumerians are credited with establishing the sexagesimal system, and that the numeric and geometric applications of the system are at once astounding and absolutely sensible. But when it comes to physical shapes, be they two- or three- or however many–dimensional, one begins to see that physical presence is capable of birthing number, as well as obliterating it.

Refer to the image above. It is a symbol long associated with the planet Earth. Without the straight lines, it is a circle. At face value, without the lines, what gives rise to numeric analysis? First of all, there is one. One shape, a circle. One unbroken curve, one cycle not yet divided into a specific number of parts. Just one. But there is more. Two is also present: the circle separates whatever is outside from whatever is inside. Of course, one could go on at length about the possible presence of zero before identifying the presence of one. With the numbers one and two apparent, there is ample room to build other values through addition, subtraction, multiplication, and division . . . The addition of the lines invite more ideas.

To challenge the 360-degree conception of the circle, as well as other systems of circular divisions (e.g., zodiac, circle of fifths, analog clock, etc.), what is to say one could not divide into any number of equal parts? One should not rely blindly on the supposed fact that a circle contains 360 degrees. The horizontal line dividing the image above is a very simple amendment to the unaltered circle. To briefly connect to music, one may imagine that the circle is a length of string. When plucked, it creates a tone. Divided exactly in half, it produces the octave higher than that tone. Various other intervals arise from various portions of the string being isolated and sounded. My point for today is that musical and linguistic systems must not be taken for granted as unchallengeable if one is to reach any kind of significant truth. Discussion is warmly welcomed!

Previous Post Ascent and Descent in the Modes of Melodic Minor Next Post Acoustic Astrology, Music, and Letters