Recomposition: New Takes on Practices of the Siglo de Oro 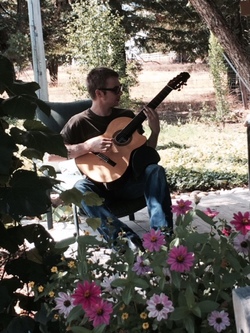 An awareness of the practice of recomposition is indispensable to understanding the compositional process of the Spanish Golden Age (approx. 1500–1700). The concept of recomposition is simple, yet is made more weighty through observing instances in which secular music is reworked into sacred music, and vice versa.

Often the change made to a secular work was as straightforward as simply replacing the existing text with a religiously inspired text. Slightly more complex, another type of recomposition can be witnessed in examples of popular, folk-inspired music put into more polished form. This exchange between registers, an exchange which may well involve arranging music for various combinations of instruments and voices, implies social mobility. By altering the level of ornamentation and overall finesse inherent in a piece of music, one moves among social strata.

I have added a text in Spanish to a plucked-style setting of the zarabanda Gaspar Sanz:

The sense of formal completion provided by a text is counter-balanced by replacing the plucked-style guitar music with strummed-style chords. From a detailed notation of certain notes on certain strings, I reduce the music to the set of harmonies from which the zarabanda originally stems. Embellishing block chords upon a prescribed rhythmic formula was typical of Spanish folk music from the Golden Age. Please enjoy the sounds, and if you are interested in more meticulously discussing the text I wrote for this piece, or any other related topic, please do not hesitate to comment. Thanks!