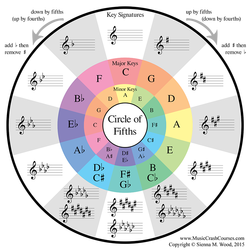 Some may be surprised to learn that the circle of fifths was central to ancient Chinese music theory. It seems not to be a Western invention at all. Built primarily on the notion of a mutable pentatonic scale, traditional Chinese music suggests, some say, a spiral as opposed to a circle. Hafez Modirzadeh has touched on this topic in an article in which the musical thought of John Coltrane is studied alongside that of ancient China. The .pdf may be found below.

One quick fact that may be convincing of the importance of the pentatonic scale: take any five successive notes in the circle of fifths and arrange them linearly instead of being separated by fifths. The result is the pentatonic scale found in musics from around the globe and across millenia. There is much more to be said on this topic. Looking forward to any feedback. Thanks.

The sound file below is a rhythmically free improvisation in which the five modes of the major pentatonic scale interweave from the same tonic. In other words, instead of each mode’s starting from a different pitch of the major pentatonic scale, all five start from the original root. In this case, that pitch is A 440. Questions, comments, critiques all more than welcome!!!