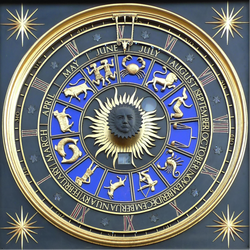 I would like to share some thoughts on the processes of birth within the system of the tropical zodiac. To be sure, the sidereal systems exhibit these ideas to a certain extent. However, I find that the manners in which the zodiac may be considered as essentially a fertile and birth-oriented system is most easily construed through the tropical arrangement. The tropical zodiac is also quite accessible to a contemporary layman in that it aligns to some extent with the Gregorian calendar.

This blog post does not aim toward an exhaustive treatment of the idea that the tropical zodiac presents multiple symbols of birth and regeneration. I will simply present a few examples of the notion and follow with some brief analogical explanation involving music. In the interest of organization and logic, as well as to provide a mathematically sound exposition, I will move from the most general to the most detailed.

A tour through all twelve signs of the zodiac from Aries to Pisces has traditionally illustrated a process beginning in birth (spring) and ending in death (winter, though Pisces arguably covers part of the spring season also). Most spiritual traditions figuratively, if not literally, entertain one or another interpretation of renewal as the result of symbolic or actual physical death. In this sense, following the unimpeded circular motion of the zodiac as a celestial calendar, one easily observes the inevitable life-after-death symbolism inherent in the completion of a journey through the twelve signs. The net effect is that of returning to the point of origin with a different perspective.

A parallel in music would be the concept of the interval of a perfect unison. One might imagine a single string being plucked twice in succession. Though the pitch is identical both times, attached to the second articulation of the note comes a comparison with the first. Nothing in the universe is exactly the same twice, if only by the simple explanation that an original statement’s reiteration occupies an entirely new temporal space. To be more firm in terms of portraying rebirth, one might ponder the unison as the same note sung by two different voices. 360 degrees of the zodiac’s circular system corresponds to the musical interval of a perfect unison.

The image at the top of this post depicts a zodiac moving clockwise from Aries at nine o’clock to Cancer at twelve o’clock, and so on (this particular image of the zodiac is skewed slightly counter-clockwise, but is still effective in the following explanation). Find Pisces, identified by two fish occupying eight o’clock to nine o’clock, and Virgo, the sign diametrically opposed to Pisces and represented visually by female figure, actually what has been established as a virgin reaping the fall harvest. These two signs are in opposition, or separated by 180 degrees of the zodiacal circle. Here, it is instructive to recall the Christian story of the virgin birth, which has, believe it or not, been identified as a rehashing of pre-Christian mythology. The Lamb of God, Jesus Christ, is born of a virgin. Pisces, a sign identified with water (e.g., the waters of the womb), leads into Aries, which is represented by a lamb (i.e., sacrificial lamb, spring sacrifice).

If one were to imagine that a diametric line was drawn from Virgo to Pisces, and then this line were turned so that each end point moved clockwise one sign, the line would reach from Aries to Libra. Now, instead of symbolism indicating analytical thought and earthly efficiency (Virgo) as well as the watery womb and the transcendental processes and mysteries of death (Pisces), one notes the essence of the 180-degree opposition is a statement of new life and self-motivating originality (Aries) across from the sign of justice, balance, and relationships between two individuals (Libra). Entrenched in this thinking is the concept of generation via conflict, or synthesis by way of opposing forces. Seen in terms of the sun’s journey through the seasons, the descent through Virgo into Libra marks the autumnal equinox. The mirror image is the sun’s ascent through Pisces into Aries at the vernal equinox. Thus, provided one holds, for the moment, to studying the signs in diametrically opposed pairs, the progression from Virgo into Libra brings the progression from Pisces into Aries.

I find it interesting to note that for all that seems to mark the contrasts between the opposing signs, there are significant unifying constants. Many have identified the male-female, positive-negative, or electric-magnetic alternation exhibited by the signs starting from Aries. Following this logic, all opposing signs share the same quality—Virgo and Pisces are both female, negative, magnetic and Aries and Libra are both male, positive, electric. According to the theory stating that, beginning with Aries, the signs follow the pattern cardinal, fixed, mutable, one finds that opposing signs share the same quality in this regard as well. Virgo and Pisces are both mutable, while Aries and Libra are both cardinal. Most astrologers agree that an opposition signifies a tension that must be resolved. Another way to think of this is the idea that the opposing signs, planets, houses, etc. have no choice but to confront each other; they are literally confronting each other, geometrically speaking. Thus, they may well be considered as a non-matching pair, but a pair that must achieve some sort of harmonious resolution to a conflict.

Think of the zodiac stretched out on a string, the first segment of the string being Aries and the last being Pisces. As I alluded to above, a full revolution around the zodiac is obviously 360 degrees, or the entire string. Diametric oppositions represent half of the journey, so half of the string. Holding any string at the halfway point and plucking it results in a pitch one octave higher than the pitch produced by plucking the full string length. Thus, the opposition relates to the musical interval of a perfect octave.

As you can see, this sort of analysis is both involved and potentially immense in scope. One natural phenomenon indispensable to the project of seeing the zodiac as being innately fertile is the overtone series, which can be related back to early music theorists and their experiments with the division of the string that brought about modern tuning theory. If you would like me to write more on this topic and continue with the various divisions of the zodiac in a manner similar to that found above, please just let me know. I would be happy continue the exploration little by little. Trust me when I say it is a lifelong process, but it is also great practice finding ways to relate these ideas in brief! Thank you.

very interesting. can you speak about gemini and it’s opposite? how does this theory apply to one’s chart given that the configuration of the stars change and one’s sun sign at birth evolves over time?

Fitting my mother should be the one to continue the discussion! The diametric opposition to Gemini is Sagittarius. Both may be thought of as masculine, positively charged, electric signs. They are both mutable signs, meaning that in the universal cycle of generation, preservation, and dissolution, both of these signs are associated with dissolution (mutability).

One zodiacal schematic I did not mention in the original post above is the fact that each sign is associated primarily with one of the four earthly elements—earth, water, air, and fire. This cycle goes through three complete iterations in one tour around the cycle of the twelve signs of the zodiac (again, sticking to the tropical arrangement for now). Every sign’s opposition holds an element adjacent to said sign. More precisely, every earth sign sits opposite a water sign and every air sign sits opposite a fire sign. This is telling in terms of generation by way of two opposing forces. The order of the elements is not random. It starts with earth, then, water, air, and fire. Ether is the traditional Western conception of the heavenly fifth element, which is generally concerned with a cosmic soul of which the individual forms part.

Each opposition takes a step either toward the heavenly fifth element or toward the most earthly earth element. The direction each sign represents depends on counting the signs from one to twelve beginning with Aries. Here, examples are useful in order to avoid confusing verbosity.

Aries (fire) is the first sign, so one counts through Taurus, Gemini, Cancer, Leo, and Virgo, and arrives at Libra (air). With this clockwise counting, one sees the symbology of Aries as a sign that actually steps toward the earthly side of things, moving down, as it were, one elemental stage from fire to air. The interpretations of this are many, and not so important now. Briefly, one might entertain the proposition that fire should be transcendent and bring about the fifth element. Yet, Aries and Leo, the first two of three fire signs, oppose air signs. Both of these signs step toward earth. Only Sagittarius, when one counts clockwise, breaks through, so to speak, the Pisces-Aries cusp when (counting clockwise) to arrive at none other than Gemini. In this light, one can see that Gemini hold a special position among air signs due to being separated by its opposite—if one assumes Sagittarius to be the point of origin of the clockwise motion—by the transcendental restarting of the zodiac at the Pisces-Aries cusp.

Another potentially interesting idea is that while Gemini represents two separate parts of one cohesive structure, Sagittarius conveys a sense of one cohesive structure comprised of two separate parts. The visual representation of Gemini is a pair of twins, and that of Sagittarius is a centaur, half-horse half-human. With this in mind, one might venture to propose that Gemini, a typically two-part symbol, finds completion in Sagittarius, a symbol defined by unification. Gemini, traditionally tied to communication, the written word, and divine revelation, sees a reconciliation of sorts in Sagittarius, long associated with generosity, spiritual and philosophical wisdom, and jovial outlooks—the word jovial, meaning cheerful and friendly, is derived from the word jupiter, the widely accepted ruling planet of Sagittarius.

As far as the application of the fertile qualities of zodiacal geometry to the gradual shifting of the stars and one’s sun sign goes, it is not a problematic matter. I understand that over the course of around seventy-five years, the entire zodiac shifts about one degree. It is important to take this into account, but does not interfere with what I have been outlining. My ideas are pertinent to either configuration, tropical or sidereal. The explanation of the difference between these two is quite well known by now, and I don’t think explaining it is worth the time here. One easy concept that I think would help you understand the difference between the tropical zodiac and the sidereal zodiac—the latter does take into account the gradual shifting of the heavens—is that the tropical zodiac may be thought of as being similar to the phases of the moon. It is basically a measure of the duration of sunlight each day, and relatedly corresponds to the seasons. The vernal equinox is something of a parallel to the waxing quarter moon, the summer solstice to the full moon, the autumnal equinox to the waning quarter moon, and the winter solstice to the new moon. The sidereal zodiac is an accurate map of where the celestial bodies appear when one looks to the sky. In our era, as an example, the vernal equinox is marked by the sun entering the TROPICAL sign of Aries. If one were able to look up at the sun and see the stars behind it, they would actually be the stars of early Pisces because the difference between the two zodiacs right now comes out to the better part of thirty degrees (forgive my