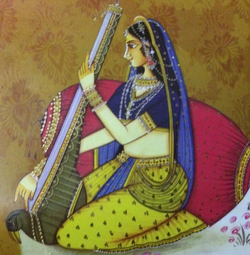 The Vedas of ancient India make clear that, during ceremonies, women played the veena more than men did, if not exclusively. Archaeological evidence from third-century CE Rome suggests the Roman lute was likewise particularly suited to female musicians.

With the rise of Islam, the ud may be viewed as an instrument with considerable links to the feminine. The ud has exhibited associations with the planet Venus, usually a feminine energy. However, history has shown the hermaphroditic qualities of Venus. Perhaps one could ponder ud players’ potentially special focus on women as a precursor to the courtly-love tradition of the Western European Renaissance. After all, much of the troubador aesthetic pointed toward the deification of the woman as object of romantic love.

Following the transition from the Medieval to Renaissance periods, one notes a feminine personification of the guitar. In sixteenth-century Spain, both Joan Carles Amat and Gaspar Sanz lent to the guitar a poetic sense of womanly beauty, and leaned heavily on very personal expressions of both religiosity and romance. Suffice it to say the history of the feminine within the world of the guitar is an area ripe for musicological study. While my own research is certainly able to include this sort of information in passing, I would be happy to see much more serious inquiry into the lute family’s inherently feminine attributes. Thank you.